The two Deputy Inspector Generals (DIG),who were being investigated for negligence of responsibility and not preventing the Easter Attack, have been appointed as senior DIGs in charge of the Western and Eastern Provinces where the Easter attack took place.

According to the police, Deshabandu Tennakoon and Lalith Pathinayake, who were recently promoted as acting senior DIGs have been appointed to this posts.

Below is the special police message regarding this tranfer. 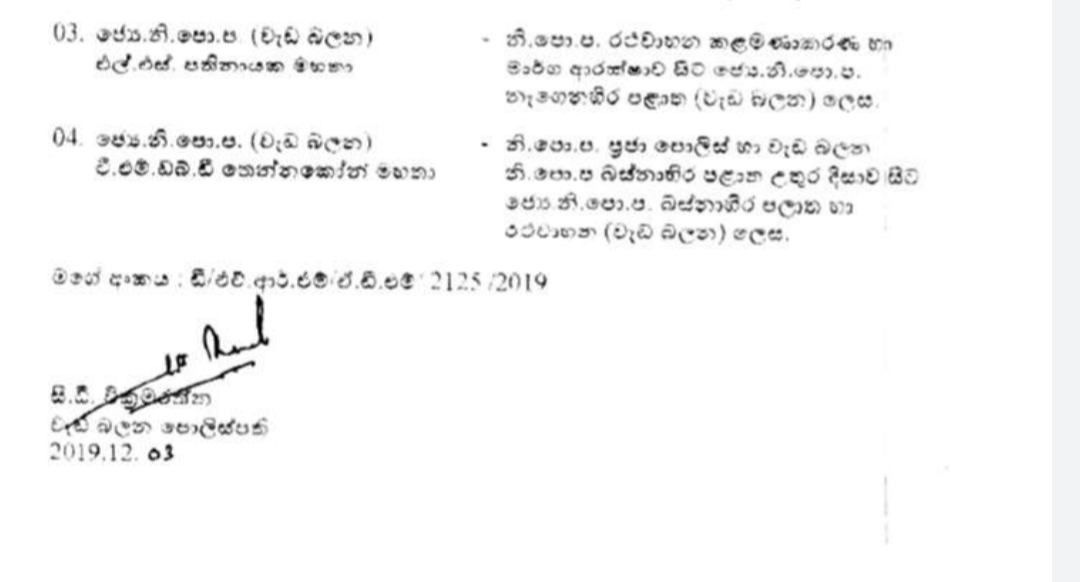 Below is an article posted on our website yesterday about the promotion of these two.

The two Deputy Inspector Generals (DIG) who were promoted recently to the post of Acting Senior DIG have been promoted despite investigations by the Criminal Investigations Department (CID) over negligence of responsibilities at the easter attacks.

According to the police, DIG Deshabandu Tennakoon and Lalith Pathinayake have been promoted to the post.

The IGP Pujith Jayasundara and the then Defense Secretary Hemasiri Fernando were arrested for allegedly neglecting their responsibilities.Investigations further revealed that the IGP had sent basic intelligence informations to number of DIGs.

Initially, the National Police Commission decided to take action against these officers and, as a preliminary step, they were transferred and reassigned elsewhere.

DIG Deshabandu Tennakoon, who was in charge of the Western North at the time, and Lalith Pathinayake, DIG in charge of Colombo were among the transferred officers.

Former OIC of the Colombo Crimes Division Neville de Silva has lodged a complaint against Mr. Lalith Pathinayake alleging that he had issued an illegal order to murder an arrested suspect.The Police Commission announced before that it had been referred to the CID for investigations about the incident.

In the meantime,Attorney General had recommended to take further steps after investigating if the officers have criminal responsibility, after the Criminal Investigations Department (CID) which is investigating the Easter attack has sent informations to the AG.

These two officers were given promotions despite the Criminal Investigations Department had commenced investigations.

Upon receiving these promotions, a large number of police officers became agitated.

Police officers are disturbed by rumors that they are to appoint one of them as the Senior DIG of the Western Province.

Below is the police message issued by the IGP promoting Lalith Pathinayake and Deshabandu Tennakoon as Senior DIGs.